I continue to be a one hit wonder here with my ongoing progress on the SYW project.  I have two items in this post.

First up are the final 8 members of the Nassau Prince Louis Regiment, completing the regiment that formed my Mercenary Bonus round post. Here's the full 24 man battalion, all Front Rank figures with flags printed at home based on images found at Kronoskaf. 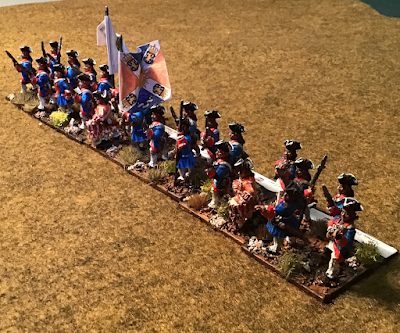 Generally the French Army's foreign infantry regiments seem to have been better rated than the native french regiments.  The reasons differed by nationality with the Swiss being professionals and the Irish being more Anti-British.  I suspect with the German regiments it was due to the officers, as these regiments offered opportunities for ambitious gentlemen who might not meet the criteria (French speaking and Catholic) required for the "French" regiments.  It is worth noting that the two premier french generals prior to the SYW (Maurice and Berwick) were both foreign and both bastard sons of foreign Kings.

A quick note on unit organization.  I've opted for 24 man foot units with 12 man cavalry and 16-18 man light infantry units.  For the formed regiments I've put a unit table on each base to keep the regiments straight, with the unit name and a small pic of their flag.  This should especially aid the  French army which should have  many infantry units in grey/white.  I have of course got 4 French regiments in 4 different uniforms and only one wearing white to date.

From the other side of the hill, we have Ferdinand of Brunswick and escort.  The allied army in western Germany was a truly polyglot affair,  mostly Hanoverian with contingents from Britain, Hesse, Brunswick and Prussia and generals from Brunswick who were also Prussian officers.  Since the Brits paid for the whole thing it was known as His Britannic Majesty's Army in Germany. 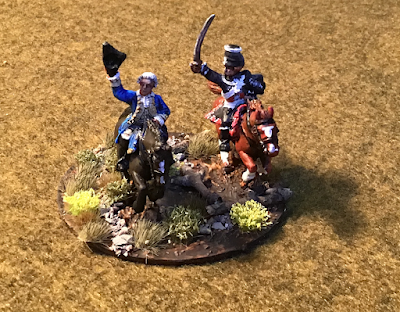 Ferdinand of Brunswick was lent to HBMAG by Frederick the Great in late 1757 following the Duke of Cumberland's epic defeat at Hastenbeck and the overrunning of Hanover by French armies.  Ferdinand quick turned things about with a strong campaign that saw him move from east of the Elbe to west of the Rhine in 1758.  He followed this up with a major Victory at Minden in 1759 and kept the army in the game for the rest of the war. 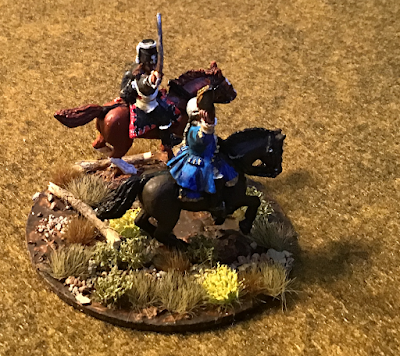 He's accompanied by one of Prussia's Black Hussars, one of several Prussian cavalry regiments serving in Western Germany.  This is the third time I've painted this uniform, and in the third scale.  In high school in the 70s I put French Shakos on Airfix British Hussars to do the regiment in 20mm Nappy's.  In the 80s I had the regiment in my 15mm SYW army, and it served well in some truly epic wargames.  Both figures are Front Rank 28mm and paint up very nicely.  Front Rank does a very good job with making the lace work standout and thus easy to paint.  I also like the horses, which are large look powerful. 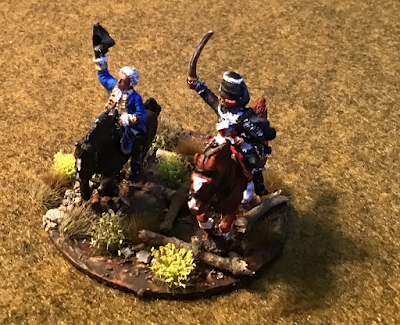 By my count that's 8 foot at 5 points a pop, and two cavalry at 10 points each for 60 points.  These will count towards both me total and the BP duel (although that point is moot given the lead Alex has built).

Lovely looking lace wearing mercenaries! I liked the original unit and the additional troops are equally delightful!
The command stand is simply splendid! Dynamic and nicely based,60 points it is!

All the best Iain
Posted by Peter Douglas at 8:10 am