From HerrRobert: The Cull knives are for our friends [Babylon V] (28 points)

“ . . . well, let me put it another way,” replied Malant. “Your lasers, missiles, torpedoes and warships... all of them you will learn to use in combat against the enemies of House Colos — enemies who will eventually be destroyed.

“But the knife is different. Your knife is not intended for the enemies of Colos. It is special. We Colosians kill our enemies with technically advanced distance weapons and political cunning. We kill our friends with knives.

“The knife is for your friends.” 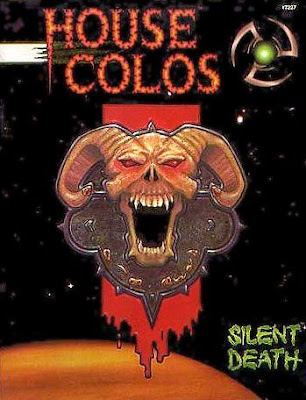 Warned that my approaching exploration of the mythical Challenge Quadrant might soon be terminated due to a strange and dire event known to locals as The Cull, I strapped myself into my newly purchased and upgraded creative cockpit, hurriedly stocked with cheap claret, cheaper craft paints, and a brace of brushes. Clock ticking down, I plotted a course.

I emerged from the wilds of hyperspace to the sounds of The Silence, approaching Babylon V, home of operatic, low budget fun.  Word of my arrival preceded me, for four Dart fighters rose from the station to greet me. Originally a product of House Red Star, the speedy Dart was now the interceptor of choice throughout known space, and apparently the Challenge Quadrant too. These four gleamed a dark and bloody red, the blazon of House Colos . . . 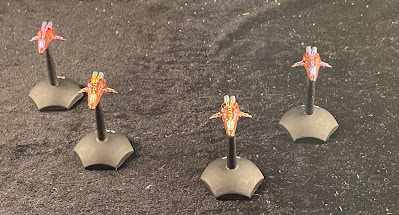 My fingers flew over the keyboard, the computer querying the databanks and filling in the tactical display. Four ships, fast as thieves and armed with twin pulse lasers and a depleted uranium firing minigun. At least there weren't any missiles this time. After that scrap with the pirates and ninjas of the Ebola Sector . . .

Resigned to my course, I watched the four form up below me, a dubious escort to my first stationfall in the Challenge Quadrant. . . 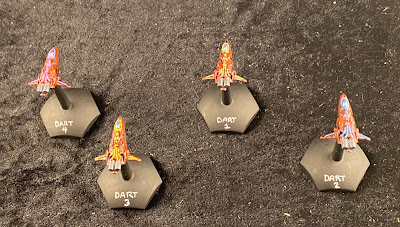 For my first entry to Challenge XII, I present four Iron Crown Enterprise Dart fighters for Silent Death. Silent Death is a small space fighter game, originally set at the height of a space-faring Terran empire, and then New Millennium moved into a post-apocalyptic world after a devastating alien invasion tore the heart out of the Imperium of Man and scattered humans across the galaxy. It's operatic in scope, with a dozen different expansions and many, many factions.

It was also astoundingly low budget to get into. All you needed to get started was the box set, complete with rules, dice, spaceship miniatures, missile and torpedo tokens, and even paper gaming mat. A good felt space hex mat is a small expense, debris, plasma defense systems and the like are easily made from felt or cloth, and you're ready for hours of space gaming. All the expansion books are available as PDFs.

The ships in the box set were plastic, but mental miniatures about, first from Iron Crown Enterprises, then ebay after ICE's bankruptcy in 2000, and now from https://silent-death.mx/.

I'd honestly not been too happy with these as I painted them up. The red over black primer didn't really work, even with a Strong Tone wash. It wasn't until I painted the cockpits that they came alive.

So, here they are.

I'm honestly not sure on the points value. I have a vague memory of some of the Kashmiri ships I submitted in the mists of time being 2 points per, so that's how I've done my calculations: 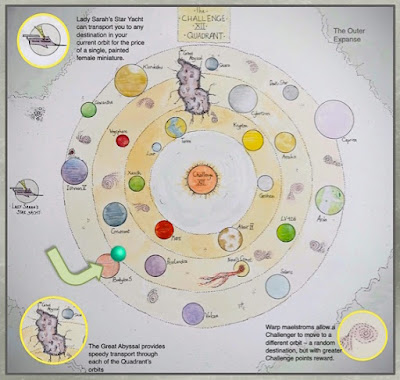