Judge Tuesday is in Session 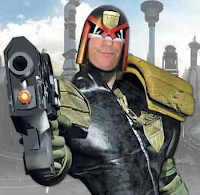 The Tuesday crew are back again and another batch of eye-watering loveliness has landed on my desk. But be warned, minion megalomania is starting to settle in and I'm adapting to the role of a Judge maybe a little too easily. I'm sitting here in front of my computer bestride a Lawmaster dispensing justice to the citizens of the Mega City Tuesday Painting Club... OK, maybe I really should take those pills the doctor gave me.

So what have we got for you today? A lonely Russian American War of Independence army; More Indians with Chariots aplenty; a touch of Seven Years War megalomania; foot & mouth from Ray; Italian mounted crossbowmen; Ming Chinese; some Post-Brexit Paramilitary Police; Necromunda Gangs; a very under-dressed goddess!; AT Guns and Naval Crew; and some Javelinmen. There's still time for more entries and as usual I'll be sitting at my desk waiting for new defendants to be sentenced judged.

Prepare yourself. Tuesday has more awesome than you can shake a Daystick at.
Posted by BigLee at 5:00 am