So about 4 weeks ago I completed my 28mm ACW armies with 28 regiments of infantry, cannon and a few cavalry. That is enough to have a division aside in 28mm and although not of Miles or DaveD proportions more than anybody will ever need. Pleased with my self I planned to start new things. And then came the Hammerhead show and the sodding bring and buy. I bought loads of 28mm ACW, 100 infantry and 30 cavalry for £35 - proper bargain. I know nobody believed me. You were right.

So I've painted the cavalry, mix of Dixons and No Clue miniatures 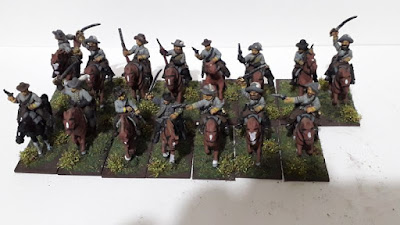 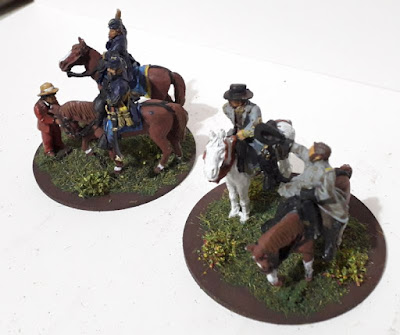 2 CinCs - all Perry - these have been on the go since the start of the challenge. The Union guys are talking a gentleman of the press, painted years ago and repurposed 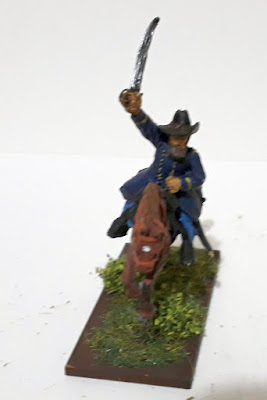 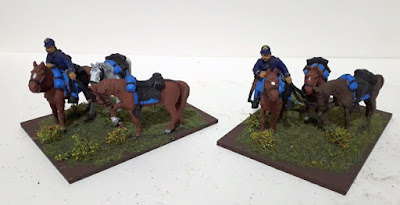 Cavalry is no use mounted in ACW so I needed some horse holders - cue Col Bill and these Perry Union ones - nicked 2 of the horses to mount spare cavalrymen.

Right off to paint dismounted cavalrymen and infantry

I can almost feel the ground vibrating. I'm not sure if that's from the points bomb landing or the thunder of hooves! No project is every truly finished so don't feel too bad at adding to it. Besides, that was a real bargain and clearly well worth the cash and the tie to paint the figures.

So a solid 400 points it is but (in keeping with my flagrant abuse of points today) I'm throwing in a couple extra for the spectacle of this lot hitting our screens. Nicely done sir.
Lee
Posted by MartinC at 10:00 am