Our Longstreet campaign has reached 1863 and US Colored Troops are starting to appear, which is a bit of a problem as I had none painted, this goes some way to redressing that.

These are made using the bodies and arms from the Perry Miniatures American Civil War Union Infantry in sack coats Skirmishing set with the heads from their black Union heads pack. It's quite a simple conversion to swap the heads, the old head is snipped off with wire cutters, a pilot hole drilled with a pin vise and then enlarged with a Dremmel, the new head is then super-glued in. Some of them are a bit of a rough fit, but I found fixing them with paint easier than using superglue. 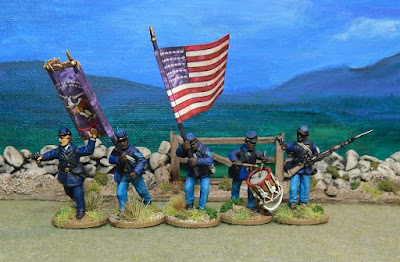 The officer in the command group is the only unconverted one, I do like the sergeant with pistol one, I think he came out rather nicely. The flags as usual are from www.warflag.com

I probably painted a few too many with non-regulation canvas haversacks, but don't think I'll be going back to fix that any time soon, or indeed ever.

Output these past few days has been rather slow, but this morning I managed to get these dull-coated and photographed.

I thought I'd show the low tech photography setup I use; it's our breakfast bar, a Daylight lamp and the camera sits on a 'pod' which is basically a beanbag with a screw fit for the camera. 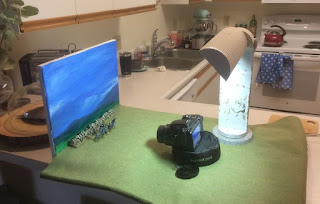 If my sums are correct, 25 x 28mm figures plus a couple of flags should be 127pts which gets me dangerously close to my target.

***
These are great looking figures and mobbed up with the banners in that first shot the look amazing.  Great work Paul!    The drum is also a great piece as I know how hard those are to paint cleanly, having tried to do several for Napoleonic figures.

As for your output, I think many of us are in that slow middle phase of the event.  If you are like me, you get all excited for the challenge, get tons prepped and ready to go, then blast through a bunch at the start.  Then kinda hit a wall for a bit, or run out of assembled and primed things, and it takes a while to get back in the groove, only to hit a mad rush near the end of the challenge to get everything completed in time!  Maybe just me...