These six 28mm scale metal miniatures are manufactured by “Black Tree Design", and consist of Code DW308 Silurian and Code DW315 Silurian Attacking from their "Doctor Who" miniatures range. "Depicted as prehistoric and scientifically advanced sentient humanoids who predate the dawn of man", these "reptile-like humanoids" first appeared in Malcolm Hulke's January 1970 BBC Television story "Doctor Who And The Silurians". 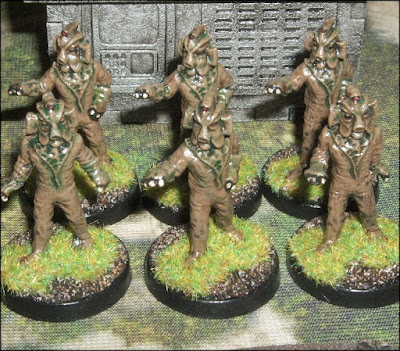 Their claws, which were somewhat difficult to 'pick out' at times due to some occasional miscasting in these areas, were given a coat of "Vallejo" White and subsequently washed with Strong Tone Quickshade by "The Army Painter". Lastly, their 'third eye' was spotted with "Vallejo" Heavy Red and later shaded with either a little "Citadel" Bloodletter or Carroburg Crimson, depending on which was closest to hand at the time.

More Doctor Who from Simon! He's making quite a bit of progress through the lead pile, bringing the Doctor's enemies to life.

Thirty points to you, sir!
Posted by Blaxkleric at 10:50 pm