From MartinN: Panzerjäger I (35 points)

I'm once again back with more Panzergrau in tow, today in the form of the puny Panzerjäger I by Warlord Games. What struck me as rather odd with this vehicle was the lack of any crew besides the moulded in driver. Thus I had to press gang some Perry Miniatures from their DAK range. They're maybe a little scantily dressed for service in France, but they were the only figures I could find out there which seemed to fit. 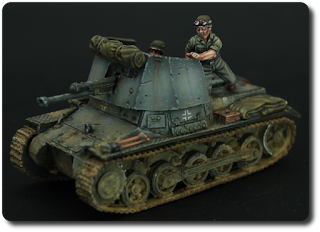 The Panzerjäger I was the first German built tank destroyer. It was built by marrying the chassis of the obsolete Panzer I with the Czech made Skoda 4,7cm PaK. A gun shield made from 14,5mm tempered steel. The first batch of 132 vehicles was built by Alkett, recognizable by the five sided gun shield. The rest of the 202 in total built vehicles were assembled by a sub-contractor Klöckner-Humboldt-Deutz. This final batch has a seven sided gun shield. 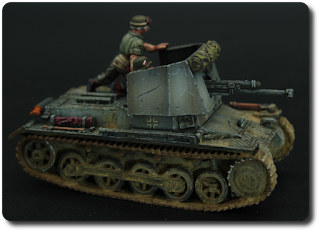 Only a hand full of Panzerjäger I and their crews were ready for combat in time for the invasion of France, but as soon as new units were ready they were sent to the front. With its 4,7cm gun and an effective range of about 500 metres against 50mm thick armour it was an important asset for the German army for countering heavier vehicles like the Char B1bis.

Apart from France the tank destroyer saw service in North Africa and the Russian front. In both theatres its drawbacks, namely a relatively high superstructure and poor visibility, soon became obvious. By 1942 most Panzerjäger 1 were lost. Tanks-Encoclypedia states that some Panzerjäger I saw service at Omaha Beach in 1944 as part of "Schnelle Abteilung 30" but the picture shown clearly is from 1940 as indicated by the berets which fell out of favour in 1941. Furthermore all the pictorial evidence I was able to find shows 4,7cm PaK(t) auf Panzerkampfwagen 35R(f) ohne Turm. So, while I might be wrong here as I'm definitely no expert on Normandy, I'm inclined to believe it was the latter vehicle the Americans had to face at Omaha. 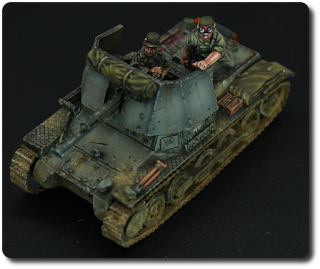 The commander figure originally comes from the 5cm PaK 38 kit and was a perfect fit once the base was cut off. I got the PaK as a gift from our very own DaveD, which sat idly in the drawer till now. The loader is from their Marder II crew and only needed a little trimming of the 7,5cm shell to make him look the part. 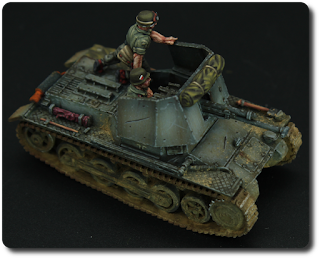 The kit went together rather smoothly but has some serious casting issues with soft or missing details due to a worn out mould. Painting the crew was no fun either as they were of the usual abysmal casting quality which I came to expect from Perry metal miniatures. It's a real shame the twins seem unwilling to sort out the issues with their caster as they offer some wonderful miniatures and poses hard to find with other manufacturers. As it stands I'll stick with other ranges mainly and Perry as a kind of last resort. 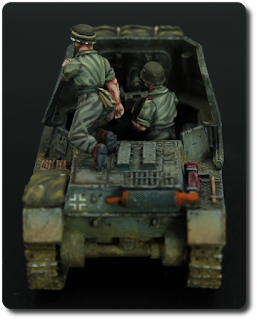 I'll claim no points for the driver as virtually all that is visible of him is the back of his helmet, but a 28mm tank and two crew figures should give me another 30 points.


And yet another spectacular entry from MartinN! More pesky German invaders.

I firmly agree on the Perry metal figures. Beautiful sculpts, but a right royal pain to clean up. I'm not sure which is worse, really, filing off mold lines and flash, or cleaning up poor fits and sprue damage on plastics.

But it's absolutely worth it. And I'm not sure tankers would really want to wear much more than they had to, even in May. Between the armor and the engine, those things have to be bloody sweltering inside. The weathering is superb. So much so, I'm throwing in another five points. It's a worthy entry to the What a Tanker! duel.