A bit of a departure from my normal scale, this model was a 'Secret Santa' present from my work colleges. I have been putting off building it as I haven't built a model Spitfire in, well, let's just call it 'a long time'. Instead, I promised myself that if I had time at the end of the Challenge I would give it a go. I did, and I have and here it is. The pilot is an entry from a few weeks ago. 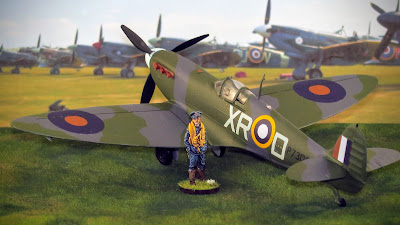 The aircraft is a Supermarine Spitfire Mk IIa and its marking and paint scheme identifies it as No 71 "Eagle" Squadron, Royal Air Force, North Weald, England, August 1941. North Weald is just 12 miles due north from where I live and is a place I have visited often. They have some excellent little air displays and a small but interesting collection of heritage aircraft on display. There is also a very interesting museum nearby that is well worth a visit. 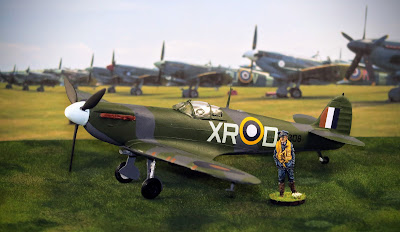 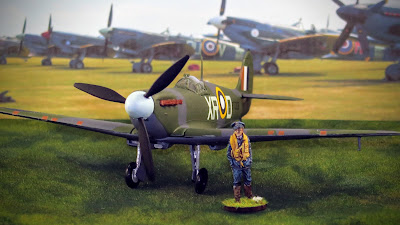 For points, as already mentioned the Pilot was painted and scored earlier in the Challenge so its just the Spitfire being submitted in this post. A model scale of 1/48th gives a figure height just under 40mm, so I guess this should be scored as a 40mm vehicle. I'll leave the final decision to Curt's discretion.

I'm not actually keeping this model as I don't have anywhere to display it, so it's going to my Brother-in-Law to become part of his massive collection of WWII memorabilia (his man-cave is his own personal museum). It's been a very productive weekend and I have one more entry lined up and ready to go, and maybe a third by the time the Challenge draws to a close.

Oh, wow, Lee, this is gorgeous. Wonderful clean work on the camo and markings- your pilot fits so well. Your brother-in-law is a lucky chap! I'm sure Curt will concur with 40mm vehicle scoring for 20 points, plus a bit extra because it is a biggie.