Deep beneath the teeming streets of Salutesville, Il Postino Diablo, Grand Master of the Cult of Rejection and (formerly) one of the city's most feared criminal masterminds sat brooding on his throne. 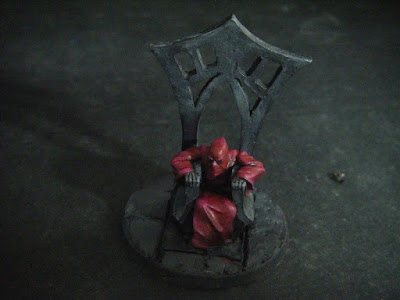 "What went wrong? What did I do to deserve this? Was I good in a past life and karma has come back to bite me on the arse when the whole city should be crawling on hands and knees to kiss my feet and beg for mercy?" 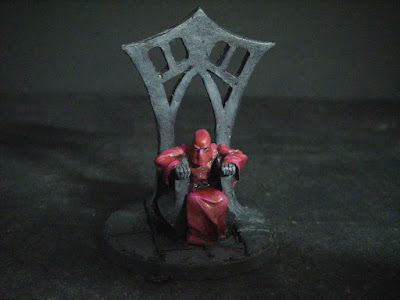 "Maybe it was the ones I admitted to the Cult. Francisco - he was OK but he abandoned us and went to that wet island. Big Lee is a decent enough sort but unlucky, so unlucky. Tamsin was fine until she got obsessed with Russians and Koreans." 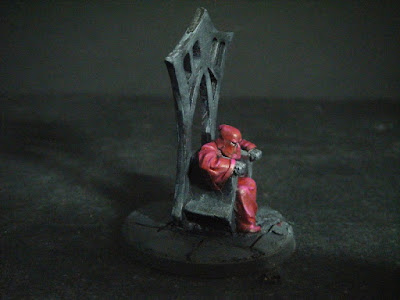 "Ray. It must have been Ray. His schemes have made me a laughing stock. First with the badgers - what was that all about, I ask?" 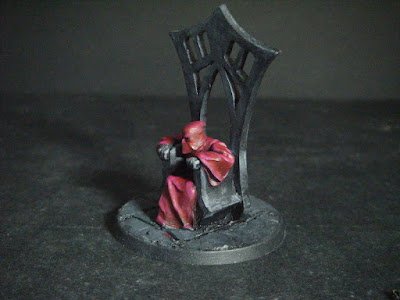 "And then with the smuggling of budgerigars!?!? I tell you, the ridicule the other Dons subject me to at the monthly sit-downs about that one. Smuggling is a respectable criminal enterprise I'll give you, but budgies? They're not even illegal to import or own and it's cheaper and easier to bring them in legally. And then there's the sand and the bags. I've told him that they aren't fitting tribute for the Cult leader, but still he insists. And what's with placing a line of five of them on the floor in front of my throne?" 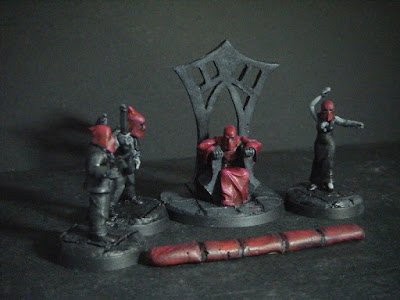 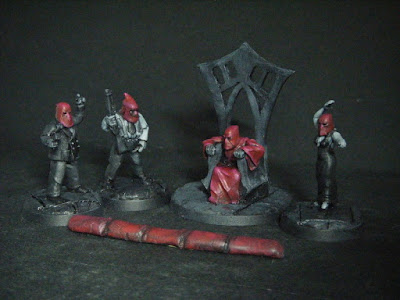 I had a little bit of time and felt in the mood this afternoon, so I decided to quickly paint up this little lot. My original plan was to pre-highlight them with the airbrush and then use glazes over that to quickly add colour, but as I started doing the first one I had a cunning idea - do them as greyscale but with the hoods and robes in colour. And the sandbags. I did make the mistake at first of trying to use airbrush thinner to make the glazes. If I'd carried on that way, I'd probably still be glazing them at the start of AHPC8!

Some close-ups of Postie's minions: 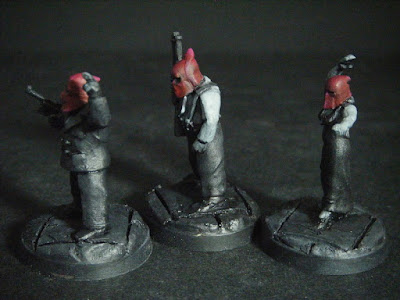 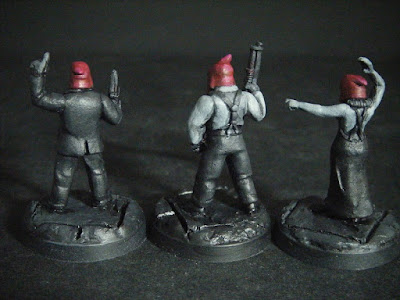 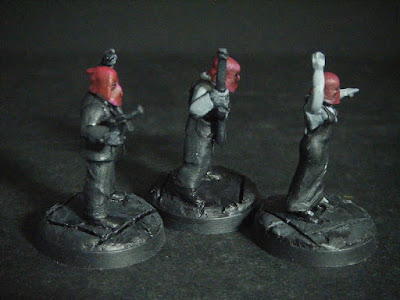 I discovered too late that the frontal shot I'd taken was obscuringly dark on one side and obscuringly light on the other. I'm not sure how that happened but my camera battery has run out so I won't be retaking the pic.

At some point in the future I might go back over them as proper paint-jobs for the Salutesville project - luckily the glazes are nice, thin coats.

Four 28mm miniatures from Pulp Figures should give me 20 points. And this is definitely my last post of the Challenge.

I quite like your Sin City chiaroscuro approach to these hapless criminals. Postino Diablo is brilliant, sitting in his crime-lord chair, brooding over his substandard minions.  He needs to have a sit down with me, I'll give him some pointers on creating an ace organization with quality minions. ;)

Thanks so much for all your help Tamsin. You're making my last few days much easier to manage (I'll upgrade your Dolly Cart for next year.). Bravo!