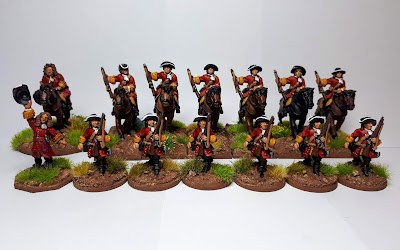 My penultimate post of the Challenge unless I really get my finger out and finish
the unit I'm painting.
Can't see it happening though. 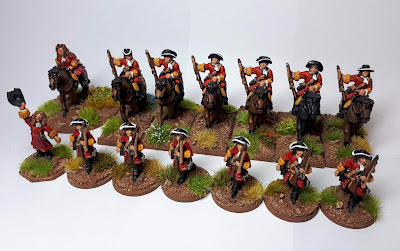 And yes it is more Donnybrook!!!!! 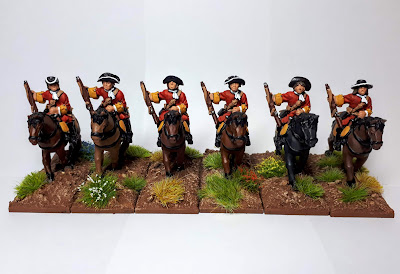 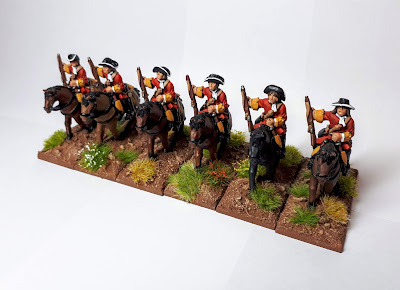 The figures are from Dixon minis, which are a real pleasure to paint, they almost
paint themselves! 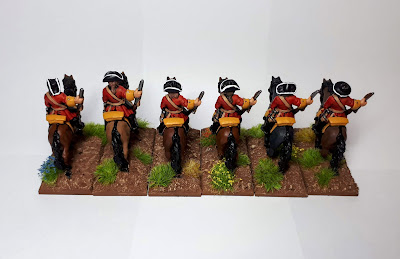 "The Monmouth’s rebellion scared Parliament into forming the first standing Army in 1685, among it six regiments of horse and two of Dragoons. It was constituted of six troops, raised by the honourable John Berkeley and named after him as "Berkeley’s Dragoons" it’s recruiting area for all of the troops was Wessex. Berkeley married Barbera Villiers, an intimate friend of the King’s younger daughter, Princess Anne. Thus came about the first title of the Regiment "The Princess Anne of Denmark’s Regiment of Dragoons". In October Berkeley’s Dragoons rode into London to be inspected by the King, a critical Commander, who was nevertheless impressed with them. For the next three years the regiment came to annual summer camp on Hounslow Heath. In the glorious revolution of 1688, the Regiment performed the same role as most of the King’s Army changing to William of Oranges side when the Monarchs position became untenable."

"In 1689 Berkeley’s Dragoons saw their first action in Scotland fighting against those still loyal to King James. The following year Fitzhardinge took over the colonelcy from Berkeley and the title of Princess Anne’s Regiment fell into disuse. In 1692 the Regiment went to Flanders to fight against the French for six years, a tedious succession of marching and counter marching waiting to catch the enemy unawares. In 1692 they fought at Steenkirk, a badly orchestrated defeat in which Fitzardinge’s Dragoons lost 130 Killed, despite their conspicuous gallantry. The colonelcy changed again in 1693, when the Earl of Essex took over for almost twenty years. Two years later the Regiment helped to recapture the fortress of Namur. After the peace of Ryswick in 1697, Essex’s Dragoons returned to Yorkshire, a blooded Cavalry Regiment."

There are also 6 dismounted Dragoons and a leader figure. 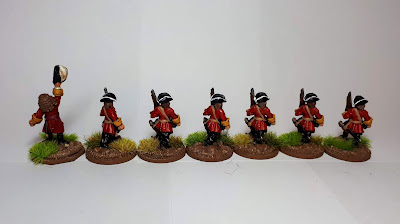 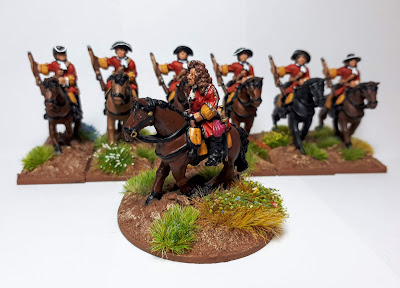 Here's the mounted version of the leader. 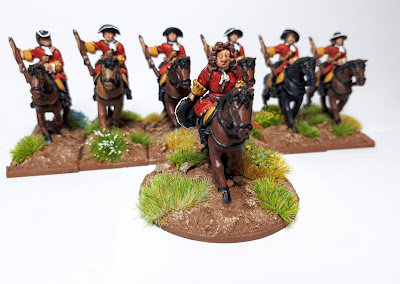 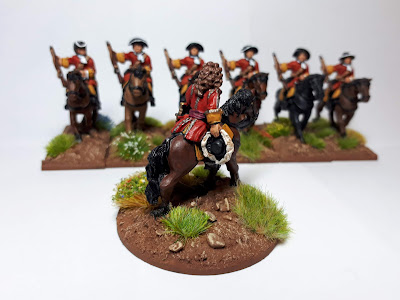 For feck's sake Ray! Another Donnybrook post? Are you doing this deliberately? At least all the figures have been very nicely painted. That'll be 105 points, but Fran has been stomping all over you today mate!