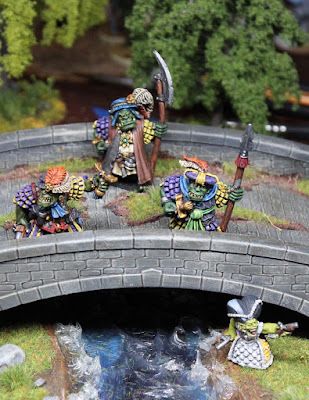 From Michael:
I don't know how this happened again, but it has!  There I was minding my own business, preparing some Moria Goblins for my Curtgeld, when a message from Sander popped up in my inbox.  "Hoi, Michael, look what I've found", or words to that effect, and as I scrolled down the message I couldn't help but roar with laughter when I saw the subject of his exclamation. 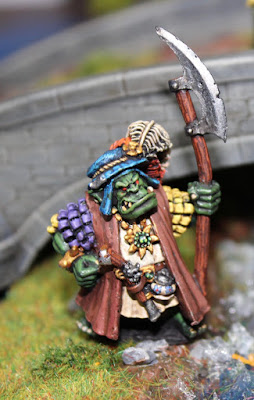 It would appear that the Die Herausforderer (The Challengers) are the gag that keeps on giving as Sander has found a set of Orc Landsknechts, oh yes he has!  Sander had agreed to purchase a set and send me one figure to paint, along with my Moria Goblins and he would paint the other three.  The Landsknecht of course had to be painted in the now legendary yellow and purple livery. 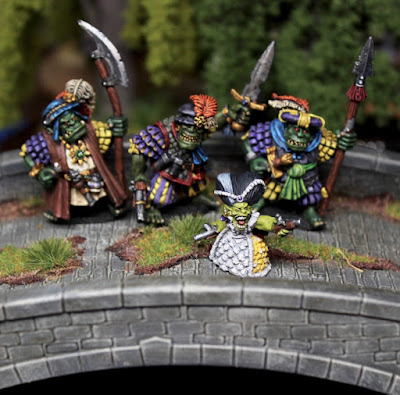 They were then all to be reunited at which point I would base them and send them on to our beloved Snowlord.  Well that was the plan, but time has got away from us slightly.  Still, just in the nick of time, the Orcs have been reunited and I am thankfully able to present a collaborative effort from myself and Sander.

Once again I am indebted to Sander who even at a particular difficult time has brought a smile to face. 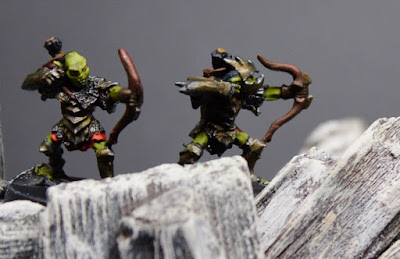 I leave you with Sander's immortal line, which has now been proved to be an utter fabrication, "I will never paint Landsknecht ever again!"

From Sander:
Yup, it went pretty much as Michael described above. Curt just has this knack of getting me to paint bloody Landsknechts, I had actually found another Landsknecht themed vignette before the Challenge started but that was out of stock so I was at a loss for a suitable Curtgeld submission. To add to this problem Michael had stated he wouldn't be taking part in the Challenge this year and that was a big bummer as well. Luckily some higher force coerced...erm..bribed....persuaded (that's the word!) Michael to enter the Challenge anyway so there we were. Curt came up with the notion he wanted Orcs and so I jumped for joy remembering I had seen some Orc Landsknechts at the Warmonger Miniatures site. The rest as they say is History (sorry Michael I couldn't resist that bad pun).

Okay, long story short: the figures are at Awdry Towers and will soon find their way over to Canada and it's freezing cold. This leaves me with just one thing to do: thenak Curt for setting up and hosting this Challenge yet again and thanking Michael for being one of the best (Hobby) friends a dumb Dutchie could ask for: on to next years Challenge I'm off to bed I'm knackered!


If I understand correctly, each of you has painted three figures of Curtgeld? That's 35 points each, if I'm not mistaken. And those orcish Landsknechts are magnificent! Those colours are great, wonderfully executed, and hopefully Curt will throw out all his boring humans* and start collecting period orcs!

*Just send them my way, good sir, and I'll dispose of them for you.
Posted by Michael Awdry at 1:09 am