Time for my last entry and an addition to a project that has seen entries in the previous two painting challenges as well!

It's been exactly a year since the last addition to my Saxon Army Corps for the 1813 campaign. I ended my last challenge with some artillery and a few infantry battalions to the project so I guess it's fitting to end this challenge with the same subject as well! This time with a slightly smaller entry though as I only have the single Leibgrenadier battalion that took part in the campaign and was the last unit to actually be part of the Corps with most other units defecting to the Allied side during the conflict.

As all my Saxons these are amazing sculpts from AB miniatures. I did some minor modifications by adding epaulettes to their uniforms with green stuff, as the normal grenadier models AB makes don't have these due to them only being used on the Leibgrenadier uniform. The unit also brings a bit of colour to the army as all other infantry is clothed in white uniforms with just the facings in different colours. The flag is from GMB Designs. 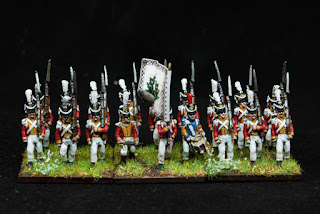 So with 18 pieces of 18mm Saxons that's another 72 points to my points count and a sixth squirrel to the side duel. My worst points total in the seven years I've taken part, but I'm pretty happy as I was actually able to do a project from start to finish and get a fairly decent amount of stuff painted despite work trips interfering with hobby time. As I normally work on at least 2-3 things at the same time I managed to have a set of half finished minis left for the challenges end again! But hey at least I have something to continue with without needing to prep something new! 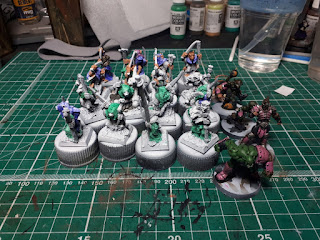 Thanks to Curt and all the little Minions for an amazing challenge once again! It's been great fun watching all the amazing entries on show once again even if I haven't been able to follow them as actively as I'd have liked! Have a great spring and summer everyone and see you around next year in the next challenge!

Splendid work on these chaps Samuli. I was trying to work out how you were doing the scoring then remembered that Curt has ruled AB's 18mm figures to be counted as 20mm!

I'm going to add a couple of points for the epaulettes you've added to take your total for this entry to 75 points.
Posted by Samuli at 12:40 pm