From Curt: Brought Together not by Fellowship, but by Fate (20 Points) 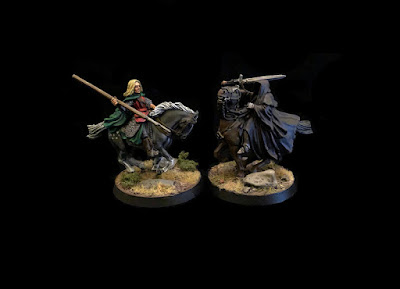 Another small submission to nudge me ever closer to my points target.

Here is the Witch-King of Angmar and his unknown nemesis, Eowyn, sheildmaiden of Rhohan.

One of my favourite passages of Lord of the Rings was during the Battle of Pelennor Fields, when Eowyn, disguised as a male rider of Rohan, defends her fallen king, Theoden, and faces the Witch-King of Angmar.

Éowyn: Be gone, foul dwimmerlaik, lord of carrion! Leave the dead in peace!

Nazgûl: Come not between the Nazgul and his prey! Or he will not slay thee in thy turn. He will bear thee away to the houses of lamentation, beyond all darkness, where thy flesh shall be devoured, and thy shriveled mind be left naked to the Lidless Eye.

Éowyn: Do what you will, but I will hinder it, if I may.

Nazgûl: Hinder me? Thou fool. No living man may hinder me!

Éowyn: But no living man am I! You look upon a woman. Éowyn I am, Eomund's daughter. You stand between me and my lord and kin. Be gone, if you be not deathless! For living or dark undead, I will smite you, if you touch him.

These models are from the older, metal range of LotR figures. I really love this casting of Eowyn, with her helm cast aside and her spear posed to be thrown. 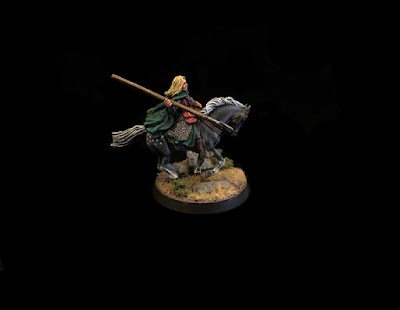 I've always had a soft spot for dappled Appaloosa horses as that was my first horse as a young lad, so I've tried my hand with one here. 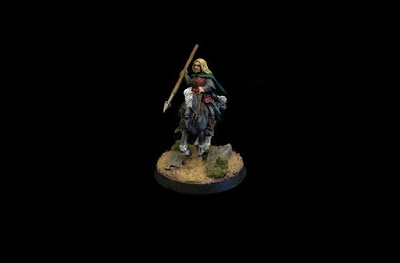 For the Witch-King, instead of him on his Fellbeast I have him here in his earlier incarnation, when he was hunting Frodo in the Shire. I love all of these early mounted Nazghul as they and their mounts have such dynamic and menacing poses. 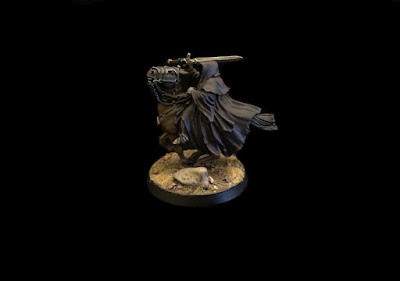 For his cloak I mixed in a bit of purple and blue with the black to give it a bit of depth. 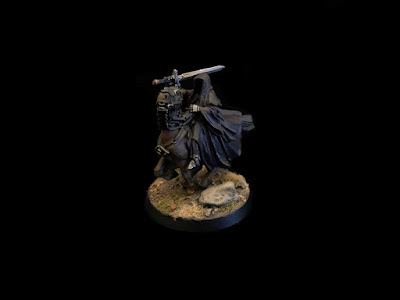 Thanks for stopping in folks!

A goosebump-inducing scene! I do like Eowyn, although she got friend-zoned by Aragorn and I don't think her achievement was appropriately recognised. There aren't many women in Middle Earth, but they do punch above their weight. The Nazgûl blackness you've achieved is lovely. I recall a Perry bros. interview where they said that sculpting the multiple layers of their garments was great fun.

Email ThisBlogThis!Share to TwitterShare to FacebookShare to Pinterest
Labels: Curt, Sarah's Choice, The Lord of the Rings