Well this hasn't gone as expected, my plans of hours painting and being productive have some what gone wrong. This is the part where I list my reasons for leaving everything up to the last minute,

1. A car crash and several weeks of trawling around used car lots looking for a replacement of a car I didn't want to replace
2. Work, work and more work, which was somewhat hampered by point 1
3. Having a mother who remembered the point at which I said I'd build a new boiler cupboard for her when she had her boiler replaced......I mean, who has ever said anything like that and then had someone hold you to it!?

Anyway, enough of excuses, time to grow a spine and show what I've accomplished for challenge IX. My main focus was meant to be my British Napoleonic regiments and the majority of my spare time was spent working on these.

These 36 chaps represent the 1st Royal Scots, they are 28mm Perry's plastics and are finished with GMB flags. As always the Perry's plastics are a joy to paint, lovely looking figures and 40 figures for £20 I 'think they can be beat. I'm 70% of the way through a box of Victrix Highlanders, but there is no way they'll make the cut off, which is my biggest disappointment for this years comp. I think they gain me 180 points for the comp and my side duel "Keep your powder dry" 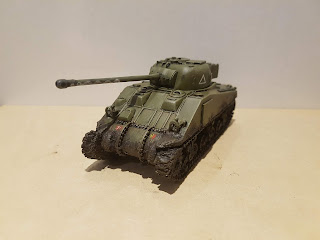 Next we have a 28mm Sherman Firefly from the Die Waffenkammer range by JTFM enterprise. This has been in my possession far too long collecting dust. The #WhataTanker challenge seemed a perfect excuse to finish it up and add to my British Chain of Command force. That is 20 points for the comp and my #WhataTanker entry. 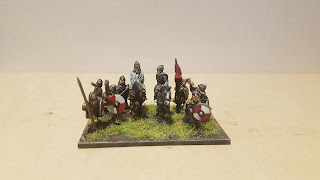 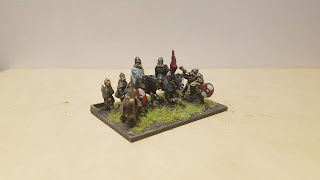 A command stand of 15mm vikings from Essex miniatures makes up the next entry. These will be used for games of Dux Bellorum and are the final piece to my sea raiders war band. I kept the painting simple and I've used the red and white shield design across all the vikings for a bit of coherency. the stand has 2 mounted and 7 foot figures for 24 points.

Finally I've managed to do a paint test tank for a forth coming project based around the Arab-Israeli war. The kit is a 15mm JSIII from Zvesda and will represent the Egyptian forces involved. I think that's another 8 points and gives me 232 points for this entry. I may sneak another small entry in tomorrow, fingers crossed! 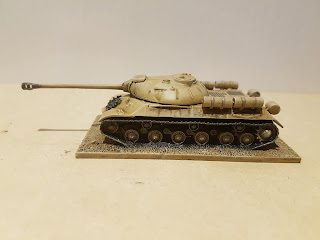 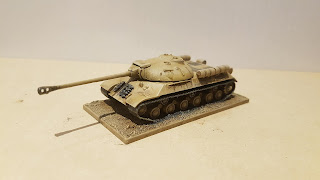 I've run this lovely variety entry through the scoring spreadsheet and it hits 230- I think you've miscounted your 15s. But, due to the overall loveliness I have awarded 2 bonus points, so no hard feelings.

Your Napoleonics are great, and it is a shame we won't see the Highlanders. You've clearly mastered armour in two scales!

Most importantly, we want to see pictures of Ma K's new boiler cupboard!

Barks
Posted by Alex Knott at 1:23 am

Email ThisBlogThis!Share to TwitterShare to FacebookShare to Pinterest
Labels: AlexK, What a Tanker!