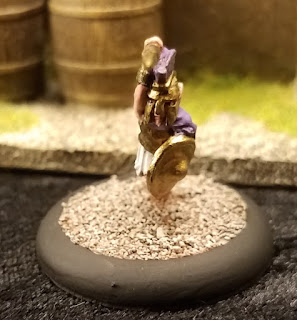 My last entry for Painting Challenge IX is a mini for an NPC I used in a Pathfinder campaign: Constantinus Prodromus, a gnome fighter.

The build was based entirely around the armament of the mini, which I found entirely by accident. He's armed with a spear, carries a tower shield, and wears a breastplate and helmet. He's very much a tank, with Armor Class 23, despite his small stature (3'4" tall, weighting 42 pounds).

He was a major player in a party of wizards clearing out the mines at Rashtan, and is usually seen in the company of a gnome illusionist/thief, amusingly called Bubbles the Executioner. 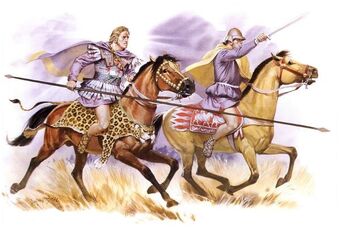 The mini itself is from Stonehaven Miniatures, and goes for a very hefty $11.99 on Amazon. I splurged a year ago, purchasing a gnome thief, two halfling barbarians, a halfling cleric and a half orc bard. Paint is on several of them, but only Constantius will be finished when the Snowlord calls brushes down. I'd partially thought they'd be my fellowship entry, but instead they languish in paint table purgatory. 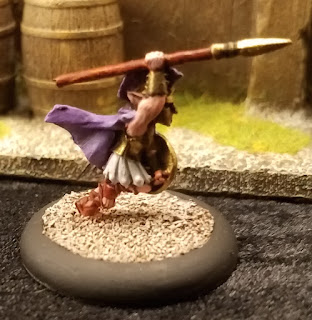 He's been done since almost the challenge began, but has been waiting to post. I, personally, found this to be a very difficult mini to paint. Partially because of how small it is, and partially because some elements just did not flow well at all. I went more Macedonian than Greek in my palate, trying to echo the Companion cavalry or the phalangites.

The armored skirt, frankly, was a nightmare. I tried white on black, which failed. I tried the top color white, which failed. Finally, I had to paint the whole thing Reaper Leather White, then Vallejo Offwhite, then hit it with Vallejo's pale gray wash. I'm still not satisfied, but it's done. 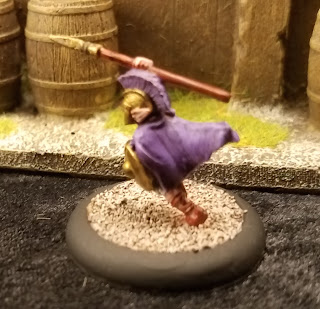 I also wanted the cloak and the crest to be purple from the get go. Purple and white is a combination I have found goes well together on a mini. This was my first experience using Army Painter's Purple Wash, so I wasn't quite sure how it would turn out. As you saw with my previous posts, I've gotten better at painting purple.

The bronze of his cuirass, helmet and shield was pretty easy, but the ears and many crevasses made everything fiddly.

I deliberately kept the base simple, since most Pathfinder mats are usually just sketched out grids.

So, another five points, which should push me over the top to my raised challenge target of 300, and a personal Best Ever for the five challenges I participated in.

Huzzah, or whatever gnomes shout before bashing you with their shield.

Haha, great work Robert. Gnomes often get a short shrift (excuse the pun) in fantasy games, so it's nice to see one claiming a bit of the spotlight here. I also like that he's working the whole hoplite/tank angle. AC 23 and in the front rank taking the hits. That's a tough nut indeed - a very cool mini for a very cool character. Well done.