These five 36mm tall metal Cybermen miniatures are sold by “Warlord Games” and can be found inside the Nottingham-based company's "The Tomb of the Cybermen" expansion set for the "Doctor Who: Exterminate!" miniatures game; albeit the box only contains four basic Cybermen figures. Sculpted to closely resemble the likes of heavily costumed actors Hans de Vries, Tony Harwood, John Hogan, Richard Kerley, Ronald Lee, Charles Pemberton, Kenneth Seeger, Reg Whitehead, these Cybermen first appeared in the 1967 television story "The Tomb Of The Cybermen", when the "small army" of silver giants were awoken from their long hibernation by the Brotherhood of Logicians on the planet Telos. 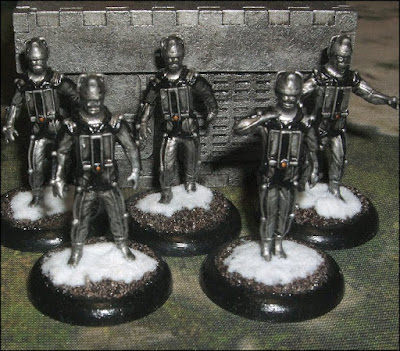 Having previously painted this particular incarnation of the "the fictional race of cyborgs" from the "Nightmares In Silver" Cybermen Collector's Set 1966-2013, I initially undercoated all five figures with just a single coat of "Citadel" Abaddon Black, before applying a double layer of Ironbreaker over them. The models were then washed with "Citadel" Nuln Oil and dry-brushed with (more) Ironbreaker.

I then spent some considerable time trying to make the Cybermen's eyes and mouth-slit stand out from the rest of their emotionless faces. In the past this has proved somewhat easier said than done as I've always found these particular facial details a little too soft for my skill with a paint-brush, and sadly these five miniatures proved no exception to this rule.

Originally, I did try carefully 'picking out' these tiny areas with "Citadel" Abaddon Black and then pigmenting them with a combination of Ironbreaker and Nuln Oil. But afterwards I was rather unhappy with how this approach looked so in the end returned to my 'tried and tested' method of simply painting the Cybermen's faces "Citadel" Ironbreaker, shading the areas with Nuln Oil, and finally 'highlighting' the eyes and mouth with a little touch more of Ironbreaker.

I did however, having done some additional research into the on-set costumes, only paint the silver giants' upper body-tubing with "Citadel" Abaddon Black, as opposed to all their piping as I did with my previously painted Cyberman. Lastly, each figures' chest-piece light was treated to a dollop of "Vallejo" Heavy Ochre and washed with some "Citadel" Reikland Fleshshade.

Classic Cybermen! Their design has more noticeably changed over the decades than the Daleks have, but they have remained iconic and recognizable. Faces without good definition can be tricky. Nice snow bases!

Barks
Posted by Blaxkleric at 12:54 am